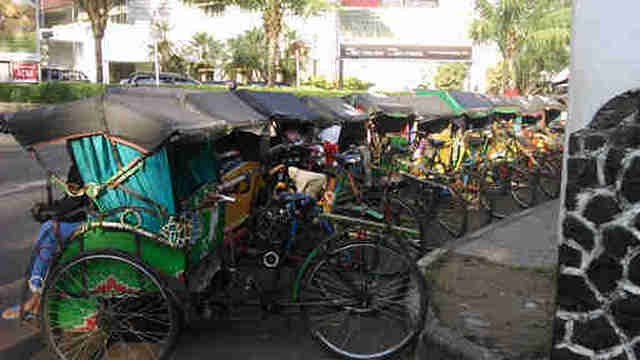 Becak in Bogor – This is Becak not a ricksaw  Many foreign tourists have referred this old and traditional mean of transportation as rickshaw, the same transportation world relics in Hongkong or China.

It should be easy to differ both species. Becak’s driver sits on the backside and pssengers are seated in the front compartment. Meantime, a rickshaw driver stands in front of the compartment and drags it.

Yet, they both have the same faith although thousands miles separated. They have become rare species.

Based on the history, the appearance of becak in Bogor was at the same time when Japanese troop occupied the city, and of course Indonesia. It was brought as a transportation to bring logistic. After the short time of Japanese colonialism in Indonesia, becak continued to be one of popular public transportation in the city.

It can be said that the years between 1945 and 1960’s were the golden era for becak in Indonesia and Bogor. Thousands of becak operates and crawled streets in Bogor. They carried thousands and millions passengers and supported many families life.

Unfortunately for them, during 1970’s, Bogor changed following the development in Indonesia. The modernization in every aspects of the city, including the way people wanted to be transported needed faster , efficient and cheaper cost, the things that could not be met by becak in Bogor.

Since then gradually, year by year, their numbers has kept on decreasing. They have been replaced by angkot as Bogor’s main public transportation. In 2008, their number was only 1,700 but seven years later, 2015, this year, the number is only 900. It has been planned by the year of 2019, becak should not be still on the list of transportation in Bogor.

There are several reasons behind this. It’s not only because becak in Bogor has been replaced by another type of vehicle. There are several other factors that are contributed to corner becak near to its extinction in this city.

The first is that the government considers that becak in Bogor is one of the cause of traffic jam. Its slow speed can not meet with the minimum requirement on modern streets.They tends to cause vehicles behind them to run more slowly.

They have been restricted and are not allowed to operate on 17 Bogor’s main streets. Becak can only bring passengers through arterial roads and housing complex only.

Another reason is natural reason. Spare parts for becak has been no longer produced. Therefore many becaks can not replace their broken parts with new ones. This result on reduced safety for passengers.

The last is that Bogor citizens do not consider becak as attractive anymore. The fare can be 6 times than angkot, Bogor’s public transportation’s fare. It is slower and can not reach far destination.

So, it seems the faith has been decided. The history book of becak in Bogor will be closed soon.

It will be the same what happened in Jakarta where becak has disappeared completely.

Bogor will soon become the next city to eliminate this old transportation mean from their directory.

However there is a sentimental feeling among people here. It is always said to see someone, something gone. Becak has been a part of Bogor people life for  more than 7 decades.It is not easy to let it go easily.

Perhaps, we should ask the government to keep few, only few operates. Probably, they still can play a role as an attraction for tourists, especially from overseas.

Really not sure that it is a good idea or not but in some cities, like Hongkong or China, they still keep some parts of their past in their modern world. Probably we should follow what they have done.

At least, someday, we may need it to explain to our grandchildren that in the past, there was this kind of vehicle in Bogor.

2 thoughts on “Becak in Bogor – Near Extinction”