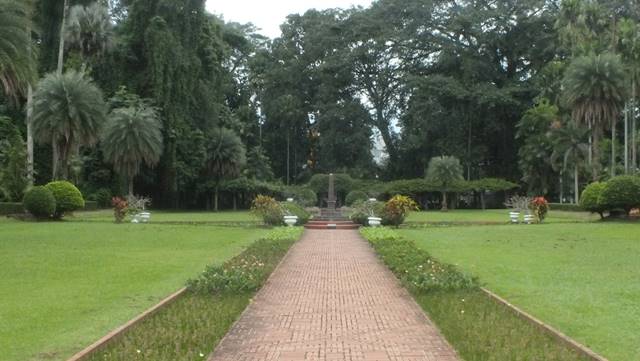 Bogor Botanical Gardens is the main attraction in Bogor City. Of course there are many others places of tourism destination here but the Gardens is still on the top list.

Every year, the number of the visitors attracted by the Gardens are over a half millions people. In average , per day visitors are between 5000-6000 people. However over the weekend or holidays, the numbers increased sometimes approach 15,000 persons in a day.

The history of Bogor Botanical Gardens

Many literature mentions that Prof. Caspar Georg Karl Reinwardt is the formal founder of Bogor Botanical Gardens. However I believe the embryo was laid few years before.

Later on after Raffles tenure as Liutenant Governor General of British Java was over in 1816, he was replaced by a Dutch named Godert Alexander Gerard Philip van der Capellen. With him came along a Germany botanist, Prof Caspar Georg Karl Reinwardt with a main duty to explore any possibilities found in East India, currently Indonesia that could be used to boost the economy of Netherlands.

In the process to comply with his mission, he then decided it would be easier if there was natural laboratory full of plantations near to him. So then , he proposed to van der Capellen to set one up on the gardens previously Raffles’ playground.

Later, in 1817, the 1st step to establish what Reinwardt had wanted was started . Van der Capellen did this by swinging the hoe as the inauguration. The name given to the parks was Lands Plantentuin te Buitenzorg or National Botanical Garden.

Bit by bit, Reinwardt collected various plantation and tree species from different places. His step was started by collecting species from all over Indonesia. Until the end of his tour of duty, Reinwardt put more than 900 species in the Gardens.

In 1949, Bogor Botanical Gardens were transferred to Indonesian Government after the Recognition of Indonesia Sovereignty. In 1951, the first Indonesian, Kusnoto Setyodiwirjo was appointed as the Director of the Gardens.

What can be found in Bogor Botanical Gardens?

As also other botanical gardens in the world, it is not an amusement park. So do not expect to find a roller coaster with screaming passngers. In a matter of fact, probably you should pay a visit to the Gardens if you want to escape from the crowd and noise of busy cities. The place is very quiet and peaceful.

You can also inhale fresh air here. The air inside Bogor Botanical Gardens is very fresh and cool. The landscape is also amazing and beautiful.

Anyway, since I am sure you would like to see something here to tell, then I will list up a bit what you can find in the Gardens

As a bonus, you can have as much as free Oxygen as you want here..:D. You don’t have to pay US$ 16 or 1,800 Yen as an oxygen bar in Tokyo offers. Absolutely free here. You can also do exercise here because Bogor Botanical Gardens is an 87 hectare lands and surely you will sweat walking around the gardens

It opens from 07.00 to 17.00 everyday. The ticket fee is Rp. 25,000/person (US$ 2.- with current exchange rate)
—-
This is the short description about the most iconic place in Bogor, my rain city. I may tell you more about this Bogor Botanical Gardens in next writings as surely there are still a lot to write more than only a short story.