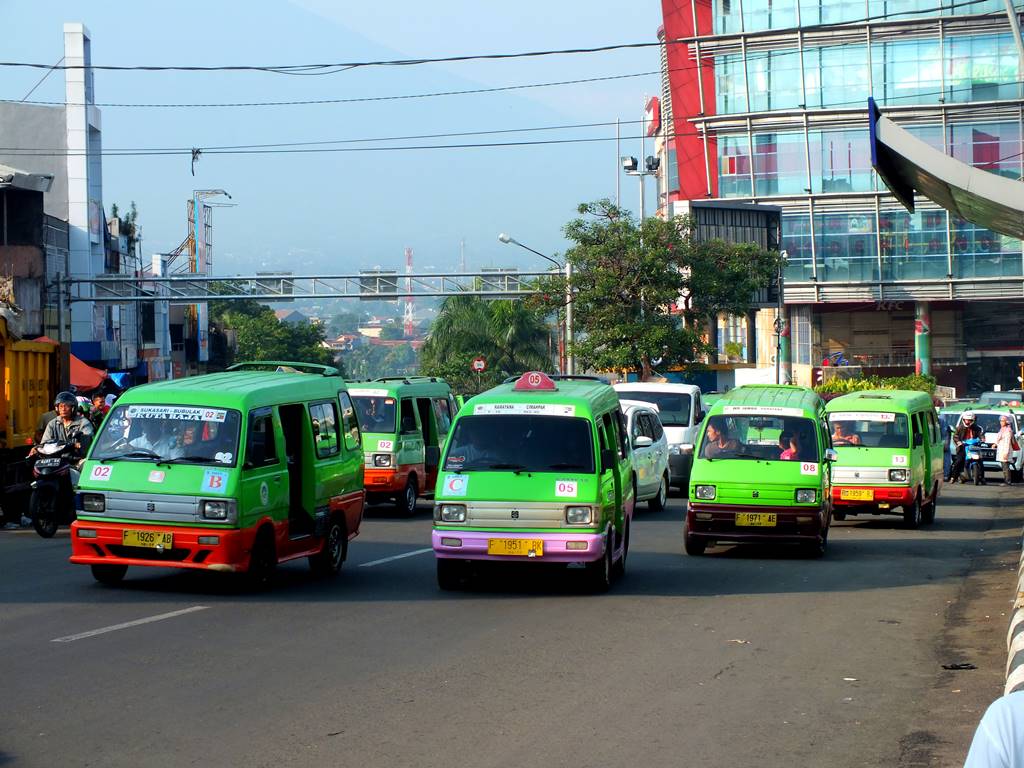 Angkot is the name of public transportation in my city, Bogor. It is actually an abbreviation from “Angkutan Kota” or in English “City Transportation”.

It was introduced at the end of 1970 era as a replacement for more traditional means of transportation such as becak, delman, or bemo. I will write about those also later.

How is the look of Angkot in Bogor?

Basically almost all angkots in Indonesia , not only Bogor are almost the same. It is a small minivan with a door on the left side. The most common car brand is Suzuki but recently made in Indonesia, Toyota Kijang is utilized as well.

It is not actually a public service provided by the government. It is 100% private owned. The Bogor government acts as a regulator only and the one who decides the tariff.

The owner of angkot business is usually not a big company but mostly individual. The owner, called as tauke, usually have 3-5 angkot but of course there are few who can afford to maintain more than 10.

The description of angkot

The angkot has a driver seat on the right of driver cabin and the seat next to driver will also be a seat for a passenger. It will have two rows for passenger, one row can afford 4 and the other 6. Usually there will be and additional seat put behind the driver cabin. In total, 12 passengers can be carried in one time by an angkot.

In Bogor, the public transportation is divided into two. The first one serve Bogor Municipalities and the second for the Regency area.

How to recognize angkot?

Simple ! It is simple beside the looks, some attributes are added.

The 1st attribute is the color of the minivan. The municipalities’ angkot is painted in Bright Green and the Regency’s in Blue.

The 2nd is that in front of angkot there is “a number” painted. This number shows the route and trajectory the angkot crawls.

The 3rd, usually on top of the front side, right above the glass of the driver cabin, the route name is either painted or in some angkot, there is a light box with the route name painted.
The 4th, on the backside, the same route number and name are painted

How to use angkot?

Well , it is also easy and at the same time for persons coming from more organized countries, it can cause a bit clumsiness.

Anyhow, let me explain how to use

1) Choose the number you need

Note : there is no specific place or shelter for passengers to get in or out. So, if you need to use angkot, just give them a signal wherever you find them

4) Seat in any empty place available. You will seat shoulder to shoulder with other passengers until the empty space is full. The seat is quite low, so tall persons with long leg will suffer

5) If you arrive to your destination, please give a signal to the driver by yelling “Kiri” (Indonesian word for “Left”) or “Stop di depan” (please stop ahead). The driver will stop immediately

7) Pay the fare direct to the driver

In Bogor Municipalities, the fare decided by government is divided into two category. The fare for student is lower than non student’s

Angkot , despite its important role as a public transportation recently becomes an annoying problem for Bogor citizens.

Most of the drivers are either blind or consciously breaks rules. This has been showed on their daily attitude. They selfishly stop wherever and whenever they want. Eventually, the traffic flow in Bogor has often been disrupted by their doing this.

Also, they tend to use many road in front of public places such as train station or their bus station as the place for them to wait for passengers. It doesn’t matter for them to occupy the whole road only for waiting passengers.

Their selfishness is known widely and people in Bogor has quite accustomed with their attitude . It is really an irritating view to see them doing this but it seems still a long way for them following the rules.

For foreigners, especially the ones who comes from developed country, it may be quite clumsy to see this situation. Also it may be felt dangerous to use this public transportation.

In fact it is not so dangerous. The traffic in Bogor is quite bad and as a result, the speed of any vehicles are limited. Angkot is included, it can not do speeding, not only because the traffic jam but also because if they run too fast, they will miss a change to get passengers.

The situation in passengers cabin itself, even though it is not full with all safety equipment is not so bad either. It is not convenient, yes indeed but it is not dangerous. Of course there is no seat belt.

Many of the tourists visiting Bogor prefer to use Hotel’s car to travel around Bogor. However it won’t give an adventurous memory. Angkot can provide you the feeling and the real nuance about living in this rain city. So perhaps, if you are not in hurry, take a tour using angkot as your transportation.

It is quite cheap compared to the fee you have to pay using the hotel’s car arrangement.

I have provided you with the list of all angkot routes in Bogor Municipalities area (but will add with the Regency’s soon). It is in Indonesia but surely you can just refer to the table for the routes.