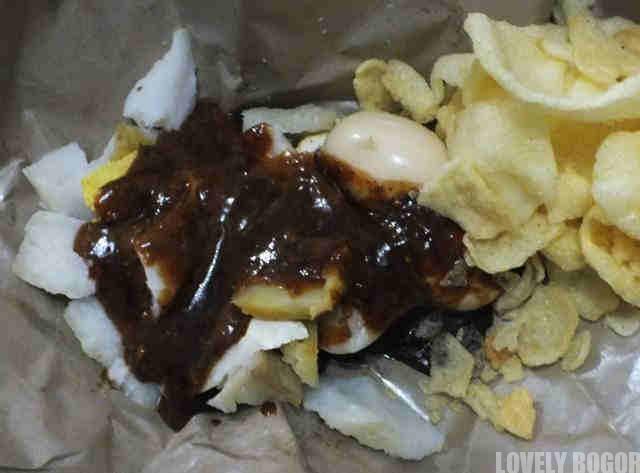 The name is weird,  Doclang. Although I’ve been more than 37 years living in Bogor, but until now I still do not know the meaning of this name

Moreover, also nobody can answer the origin and the name of this food.

What I know is that Doclang has been as one of the most traditional cuisine of Bogor.

Well, please guess what this Bogor old food consists of. The photo above is the appearance of Doclang after the packaging is opened.

Can you guess? Try to match them with the following:

(The above is Doclang before watering peanut and soy bean sauce)

Rice cake, tofu and potatoes are cut into small slices. Then a half of boiled egg and the last step was to pour all with thick peanut sauce. Before crackers are added, pieces of the material that has been poured by thick peanut sauce will be given soy sauce.

Interestingly, most sellers use a less common type of soy sauce. The sweet black liquid that are often used comes from the Bogor produced brand, namely Zebra Ketchup.

However, perhaps due to increasingly difficult to find the zebra-branded ketchup, ABC and other brands sometimes also used.

Simple but tasty. Some say it feels like another old cuisine from Jakarta called as “Kupat Tahu” and indeed are essentially very similar materials.

The difference lies in the wrapper of therice cake. Doclang used the rice cake that is wrapped in “patat” leaves (Phrynium capitatum) that has long been used as a packaging material Bogor community.

Maybe that’s where the difference taste “doclang” and “kupat tahu”

Where to find doclang in Bogor?

It’s a difficult, difficult question. As well as other traditional foods in Bogor, their presence has been gradually less and less day by day.

Sometimes it is easy to find them, on another occasion it is difficult. If we wait, they did not show up. When our stomach is full, then often they show up.

Nevertheless, there is one place where this traditional cuisine can be found, which is around the Red Bridge. Precisely next Terang Shop (see photo of the store). Here, since the first place whe fans of this traditional food go if they want to find doclang.

Since the time, I was a child until now this is still the place. Even to this day, when the pictures were made.

It is not far from Bogor Station (a minute of walk) and easily accessed from Terminal Baranangsiang (using No. 03 Red public transportation).

You should try this whenever you come to Bogor