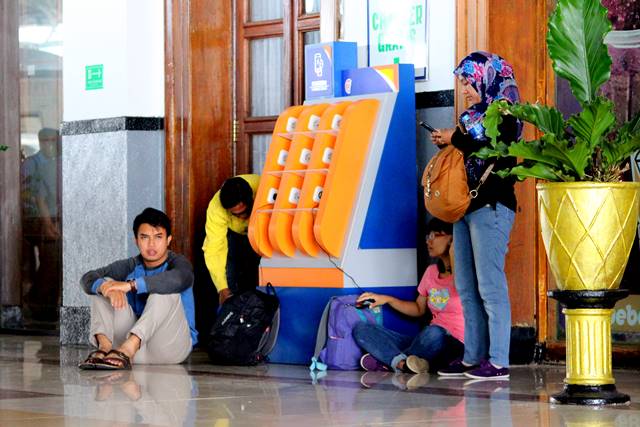 This century people, society are so attached to their smartphones, gadget and having a low battery ones could ruin their day. Low battery sign blinking repeatedly is such a “tragic” moment, especially when you want to update your Facebook or Instagram status while you are traveling.

It is understandable your feeling of worry to disappoint your loyal followers waiting for fresh and newest stories of your journey to a place whose name they never hear or know.

Although Bogor is not a big city – a medium, maybe – like Jakarta. It’s not definitely Paris, London, or Milano, but Bogor is also quite “civilized”, at least in my opinion. Its society has the same habit (bad or not is up to you to judge) for being inseparable from their smartphone or gadget.

That’s why in some public area, such as Commuter Train Stations, they install something that will cheer up the days of many traveling people.

You can take a look at below pictures to know about what “something” is. Yes, it is now new invention and without sophisticated technology. In fact, the “something” uses very old technology found many years back. The something is a smartphone charging booth, free one.

There are at least two in small stations but in bigger ones, the administrator of Indonesian Railways provides more than 5. Bogor stations prepares +- 10 charging booths all over the station.

The only thing you need to bring is your gadget charger because it’s not provided. You don’t have to pay anything, the only thing you have to spend is your time waiting for your fully charged battery sign appears.

Don’t worry. You can also use your smartphone to update your Facebook status. Just one request from me, please tell your followers that there are free smartphone charging booths in Indonesian Commuter Train Stations.

So, they don’t have to worry not to be able to keep updating their social media wall when they travel to this country, especially this city.