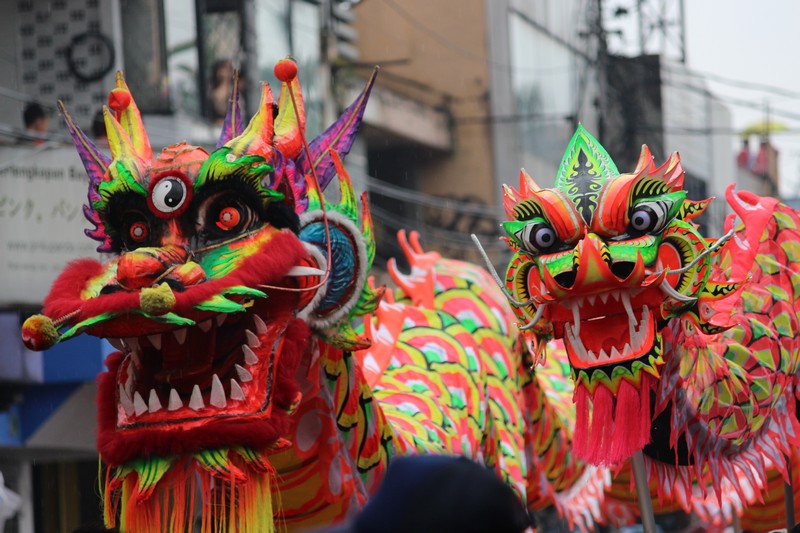 Absolutely, I am NOT. It is for sure that I am not a gamer who is fond of Game of Thrones. I am too old and perhaps 20 years past of age to play a game like that. Neither have I watched the movie series, not even a single episode.

So, all of the heads of the dragon shown in this article were definitely taken from the game, nor the movies. All of these were what my Canon 700D captured, probably a month before I wrote this article.

The faces of the dragons here were photographed in an annual event in Bogor City, where I live in for more than 38 years.

As perhaps you have read before, Chinese society has contributed to the forming of the city since more than 3 centuries. Therefore, their culture has been inseparable part of the city.

Every year, on the 15th day from Lunar New Year, there is a day called Cap Go Meh (or the 15th day), or perhaps, in many countries where Chinese diaspora exists, it is also called as Lantern Festival Day.

On the day, Chinese people will close the series of celebration of the new coming Lunar New Year which includes many activities and rituals like praying, worshiping and other things. During the day, they will usually celebrates with the appearance of Liong (Dragon) and Barongsay (Lion) dances.

So, since around 10 years ago, Bogor’s government has decided to adopt the event and make it a moment of People Party and not only for specific ethnics. Every ethnics in Bogor can send their contingent to join the event.

Most of the even will be done in specific location that people knows as the Chinatown in Bogor, Suryakencana street. The form of the even is a street festival full of parades and attraction.

One of the most favorite attraction is the appearance of Liong and Barongsay dances. Many groups will create their own Liong (or Dragon).

I am not sure what kind of dragons inside their mind. Nobody has ever seen this mythical animal. Perhaps, they took the image from the game (possibly), or the movies (it is also posisble), or they created from their own image about the dragons.

Anyway, those dragons are really enjoyful (and for sure colorful without doubt). Please just take a look at the below photos Therefore, I am quite sure that nobody will have a nightmare after seeing them in Bogor Lantern Festival. More feeling entertained, I believe.

So, if in your country, there is no dragon, probably, you can start making your vacation plan for next year from now. I am suggesting my hometown because definitely the dragons will appear again next year, around Feb 2018.

See you there because I am most likely to be there again, with my camera, hunting for more heads of dragons. You are welcomed to join if you want. This is party for everybody.