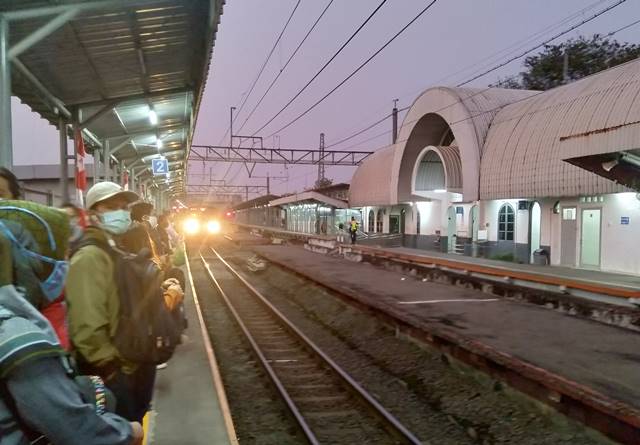 Physical/social distancing is one of several keywords suggested by all health expert around the world that can help to prevent the Novel Coronavirus, Covid-19 from spreading and creating more damage to humanity.

By giving one or two meter distance between people, it can stop virus in droplet ejected when a person speaks, sneezes, or cough from reaching another person.

It sounds easy to apply.

However, in actual, it easier to be said than done, especially, for public transportation users, like Commuter Line Train service operating inside the Greater Jakarta.

The popular mass transportation for its cheap fare has always caused crowd, in stations or inside the train. During normal peak hours, a car usually carries more than 300 passengers.

There will always be a question of safety for the passengers, especially during the Covid-19 pandemic.

Long queue of waiting passengers to enter or waiting for a train becomes favorite information broadcasted, almost every week.

If both information are combined, it is inevitable that an image of dangerous situation created inside society. Commuter train is a dangerous and you may get infected by using their service.

I experienced by myself. In the early June, when Control Movement Order was loosened by the government, my company asked me to start Work From Office (WFO) again.

After several days, when we had a chat with some neighbours and told them that I restarted to use train service instead of driving my 2015 Nissan March, I saw several raised eyebrows.

They asked a question with worried look, “Why don’t you drive your car? Taking a train is dangerous as passengers found to be Covid-19 positive”

I understood their concern. They just wanted to protect themselves and their families. If I infected, they may suffer too.

No, I don’t want to be the cause for that.

I also want to protect my own family from the virus. I don’t want to suffer either.

I wish I was a Google staff. They allowed their employees to WFH until 2021. Unfortunately, I am not. I am just a staff of a garment trading company in the Capital of Indonesia.

Parts of my job are related with many other parties, like factories, couriers, etc and those can not be done while sitting on my working desk at home. I must do it in the office.

Therefore, like or not, scary or not, I must come to office and do my job otherwise I can’t earn a living.

To do this, there are several options considered.

I looked at my inventory of vehicles that can take me to the offices, which are

I did travel everyday from Bogor to my previous office in Tangerang, 52 Kilometers from my house. I did that.

In fact, just two years, I decided to move again because after two times accident, I learned what dangers I faced on every ride. Losing of concentrations due to tiredness, reckless rider and driver, rain, bumpy road, darkness of night, pushed me to find another job.

It’s not safe. I know that thousands of people from Bogor did the same but I decided, it was not for me.

Besides, the motorcycles and myself got older now. It brings me another worried of the safety. I don’t I can endure riding yet boring adventure once more.

I put aside this idea.

One of the main thing must be considered is the safety.

The second option is the Nissan New March which is much younger than the Hondas.

It’s also safer as I don’t have to interact with other people. I will be in a cabin by myself and once arrive, I can go straight to my office.

It’s much safer from Covid-19. Health protocol can be executed in maximum.

Jakarta is known to be one of the most jammed city in the world. Bogor is quieter but once, it was gained a label as the 2nd ranking of city with most best traffic, in the world by Waze.

I experienced by myself how difficult to drive between two cities. It took me 3 and a half hour from my home to my office. Yes, 3 1/2 hours, 210 minutes. You can calculate the second by your own if you like.

It’s one way. The same time I must spend on the way back to my small house in the Rain City of Indonesia, Bogor.

Seven hours I must use my time just to drive.

Adding this data with possible spend of gasoline fare, highway fare, parking fare, and once again the physical condition of mine, this option was not considered further.

Tiredness of long 7 hours driving surely will create moments of loss of concentration while driving. My stress will soar right away on the jammed road, especially because more people take their private car to come to office.

This option put me in safe chamber of my car but it put me in danger on the road, and also my family budget.

The last of the options are commuter train. I have been using this transportation back to 1989 when I studied at the University of Indonesia. It’s like my third home considering how much I spent on the train. The number ranks on the third.

There is one weakness of using this transportation, during the pandemic. I would be in the middle of crowd, everyday. The potency of becoming a victims of the cruel virus is much greater than the other two options.

Packed passengers in small room, reckless people, health protocol that can’t be applied frightened me a lot on the first day of my WFO period.

The news on the TV and news media troubled me.

That’s why I took strict precaution on the beginnings by using latex glove, long sleeve, and a week later, a face shield. Two bottles of hand sanitizer are inside my bag.

I don’t like it but my family needs me to earn a living, otherwise, the impact to my little family’s economy will make Corona’s damage looks small.

I was wrong. My fear was calmed since the first day of WFO. I was still worried but experiencing the situation in the station and on the train, my fright diminished to the normal “cautious” level.

More and more I used the train, I became more relax. Of course, I will keep doing physical distancing and other health protocols suggested by government.

However, it is helped by several things that I see

It’s strictly applied to all passengers. Without a mask, a passenger will be asked to be out from the queue. I saw one guy decided not wearing a mask was asked to stay out from queue.

All officers are not only wearing masks but also face shield and gloves.

Tirelessly, they keep shouting instruction to passengers to keep the safe distance between each other and many times askeda person who stand too close to the other to move.

They even prevent passengers to wait in a platform if the space provided has been considered fully.

Everyone must follow otherwise, you may not be allowed to enter the train.

Indonesian’s government says that we are fighting with Corona and in actual condition, we are.

The officers who impose the protocols are not consist of only members of Indonesian Railways. The teams are added by police and armed forces personnels.

Some of them bring heavy armament like long barrel weapon, not just a pistol.

It seemed to work giving deterrence effect to any stupid and reckless passengers not to try doing something to escape from what is instructed. Everyone must follow.

Having used commuter train 2/3 of my life, I accustomed with the life of full of egoistic and reckless people. I saw it often during my trip with train how people only thinks about themselves and forgetting that there is a regulation, ethics, and norm.

It is also one of the reasons of my concern using commuter train during pandemic. Lots of stupid and selfish people, it cause dangers to others.

Surprisingly, during my two months of WFO, I found only few. Yes, there are still some but not as many as before.

I have never seen passengers obediently following what the train offices instructed. Even before the instruction shoueted, many passengers will stand on the standing sign.

Not only wearing a mask, many passengers uses also face shield and gloves, like I do.

The discipline is there.

It brings order inside the station and train. Eventually, it brings relief to know that everybody is on the same direction to prevent the Corona from spreading.

I don’t know how they manage it. Firstly, I thought it was impossible to keep low number of passengers inside a train.

Formally, during the pandemic, inside one car, there should be only 60 passengers. Later, after the MCO is relaxed, the number grows to 74.

I am quite correct actually because for impossibility to count the number of passengers allowed to enter a train . I was wrong to assume it will be crowded as usual, 200-300 passengers in a car.

There are enoughs pace for passengers to maneuver and avoid standing faca by face each other. Although, the 1 m standard of physical distancing can’t no but no skin contact like normally happened on normal situation.

There is always distance.

A bit premature, maybe as I know at this moment nothing is safe from Covid-19. The danger is there.

However, it will be unfair to say otherwise.

Compared to two other options, I thought I made a correct decision to keep using the transportation that I have known for long time. It’s much safer option, especially after experience it by myself and not just based my judgement on news from TV or other source.

Even, I feel much safer inside the station and on the train than outside.

I ride from my home to Cilebut station (in Bogor) and from the Gondangdia station in Jakarta to my office. It is a short walk.

Honestly, it made me inconvenient, especially when I walk to a place where I park my Honda outside the Cilebut station. Although , the distance is only 20-30 M but it worries me more than when I am on the train.

It’s like no two different world. People without mask gathers everywhere. Don’t ask me if they know about the health protocol or not, because it seems there is no pandemic outside the station.

No officers to make sure the application of the protocol either.

Finally, I think I must say, I am a bit relaxed now for knowing that the situation inside one of the public transportation is such organized to prevent the virus from getting more victims.

It’s also the thing I explained to my worried neighbours, that probably, I feel safer while inside a station and on the train (and of course my home) than other places, including the housing complex where we live.

As it is actually what I feel.