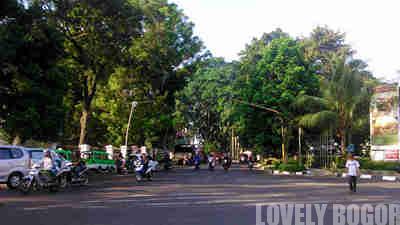 The next name on the oldest streets category in Bogor is Juanda Street.

A part of the road were established through the Rain City , Bogor that was known at that time as Buitenzorg. Now, this part of the old road does still exist but is in different form.

It has been split into several streets in Bogor. One of them besides Sudirman Street is the Street of Juanda.

The name of the street itself was taken from the name of the 10th Prime Minister of Indonesia i.e. Ir. H. Djuanda Kartawidjaya. He was also the one who declared about Indonesia sovereignty over the seas between Indonesia Archipelago.

In the past, Juanda street played supporting roles to the core of the city, Bogor Palace. Many supporting structures were established along this part of De Grote Post Weg.

A hotel was developed in 1856 . Its name was Binnenhof Hotel. The hotel is still there until now under a new name. Salak Hotel the Heritage.

One church , the Koningin Wilhelmina Kerk (the Queen Wilhelmina Church) was set up next to a side entry gate of Bogor Palace. It is known today as Zebaoth Church or the Rooster Church.

The current Municipality of Bogor was developed in 1868 under a name of Societeit. This was the place where ladies and gent, of course Dutch or European gathered and found leisure.

All of the buildings set up on the street was intended to fulfill the needs of Dutch VIP or White/European people.

The nowadays Juanda Street is still acting the same. It is where many Bogor government offices are located.

Along the street, we can find besides the Bogor Municipality, the prosecutor’s offices, Indonesia Institute of Sciences, Zoology Museum and many others. Most of them use the old building of Dutch Colonialism Era.

Therefore , it is no wonder if we walk along Juanda Street, we can still feel the nuance of the past Bogor.

The street is a nice place. It is cool as the effect of natural canopy provided by many canarium trees. Furthermore , there are many nice spots along the street due to the presence of the Bogor Palace.

From the street we can see many groups of deer from Axis axis species live peacefully in front yard of the Palace. The beautiful landscape of Bogor Palace can be seen when the sun shine.

It was also a reason why the previous name of Salak Hotel the Heritage, another name was Bellevue Hotel. The word Bellevue means Beautiful View. The owner might have seen the beauty from his hotel.

How to reach Juanda Street

If you stay at Salak Hotel the Heritage, then you don’t need this because the street is in front of the hotel.

If you visit Bogor by bus, you will get off in Baranangsiang Bus Station. Just take “angkot” (please use this website “search” facility to find the meaning) or public transportation no Red 03. It will ride you to this street. You won’t miss it if you read this writing.