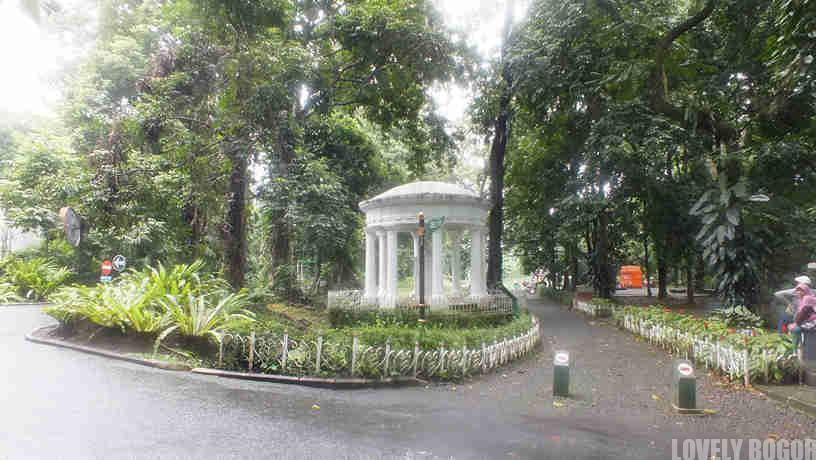 There is a monument near the main entry gate of Bogor Botanical which can be seen as soon as you enter the Gardens. A white gazebo like frame with 8 pillars stands at a corner. This is what is known as the Lady Raffles Monument.

Many visitors that come tend to overlook to give a glance to the monument. Perhaps, because it is not big and the appearance is also very simple. Without approaching and reading the information board next to it, visitors may just consider this structure as a gazebo.

However, once you read what is written on the board, you will find that the monument represents something important for a very important person in Bogor and Indonesian history.

Anyway, allow me to brief you a short story about the importance of the Lady Raffles Monument.

Who is Lady Raffles ?

Her original name was Olivia Mariamne Devenish. She was born in 1771.

She later in 1805 married the famous Sir Thomas Stamford Raffles , a Liutenant Governor General of Dutch East Indie (later known as Indonesia). Yes, he was the same person recorded as the father of London Zoo and Singapore Botanical Gardens.

It was her 2nd marriage after her first husband passed away in 1800. At the time she married Raffles, she was 10 years older than the noble.

Raffles was appointed to govern the previously Dutch colony in 1811 after Great Britain defeated Netherlands. Olivia Raffles accompanied her husband to come to Java.

What is Lady Raffles Monument ?

It , of course as what the name means is to remember Mrs Raffles. However there are at least two ways to see its function and importance for Indonesian people and also to his husband.

The first one is to give us a thought about what she did in the past.

Many of Indonesian people still consider as of today that all people from colonizer countries are bade. The feeling is fully understood knowing millions of life sacrificed and being victims of the greediness.

The Lady Raffles monument should tell us about things on contrary. She was known to smash many obsolete ways of life in her era.

Sir Raffles was known as a man with egalitarian way of mind. He tried during his tenure in many places to end slavery. His way of principle was also adopted by his first wife, the Lady Raffles.

Olivia Raffles ruled out many customs during her staying in Java. For example, it had been a custom that wives of Dutch officials didn’t interact with native ethnics. They never appeared in any meetings or parties held if the events were attended by natives.

She broke this custom and asked the wives to also attend the parties and events.

She, herself traveled a lot to many places within her husband’s teritory. Something that was considered as unusual.

For me, she had laid another brick on our foundation as a country by doing this. The small thing done by her was quite a leap in the society and era.

The second way is more personal

Yes, the 2nd thought of Lady Raffles Monument is really personal matter. It should give us sweet and sad feeling at the same time.

To understand what I said, please just take a look at a poem carved on the inscription in the monument.

Oh thou whom neer my constant heart ;

Yet still – forget me not

Do you see what I meant ? Have you seen about the sadness suffered by the great General. The grief of a man losing his beloved one was shown clearly by the short poem.

Raffles was known to have depression after the death of his first wife. He later married for the second time but I believe, he never recovered from the loss of his lady.

He lost not only his love but also his partner. It must be very hard to experience this altogether at the same time.

He might be a strong person, a general, a man but what was written on the inscription showed that more than that he was just a human being. The wound of his heart could not be hidden. His love could not also be concealed.

From this point of view, the Lady Raffles monument is not only a memorial . It is also a Love Monument of a person.

Well, that’s my story about something looks ordinary but actually contains something important for many people.

Perhaps, when you come to my city, please do not forget to ask your tour guide to visit the Botanical Gardens.

You may find a contrary thing, the Lady Raffles Monument, the thing represents an everlasting love of a person is almost side by side with a broken heart bridge.

It will be interesting to know your comment about two things related to LOVE but on opposite side.