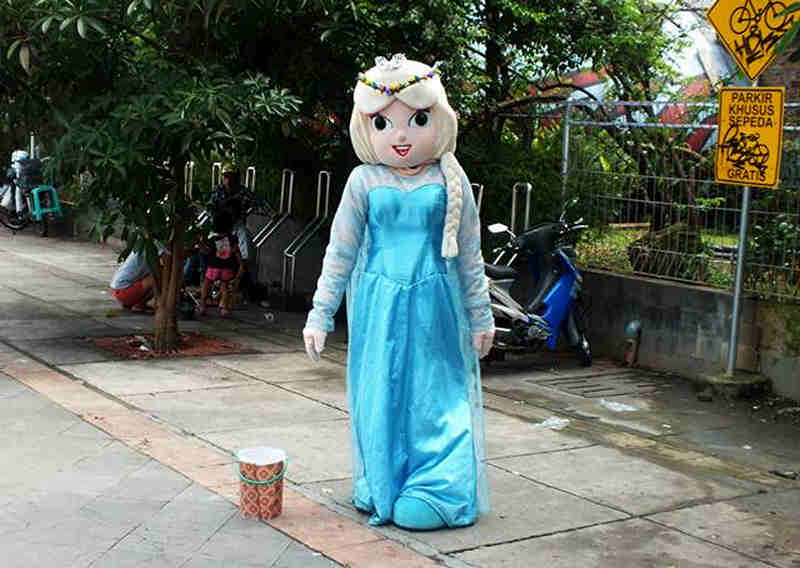 Yes, I met a Snow White few days ago. Not from TV but on Nyi Raja Permas street, one street in BogorCity.

Here, take a look at below picture.

Definitely, it is a Snow White, the same character that I read a long time ago. I would never miss. She came without the 7 dwarves and also the Prince who will kiss her at the end of the story. She came alone.

Actually, during my walking down Bogor’s streets, I have met also several other famous cartoon characters from all over the world. Some can be recognized but some others can’t.

Here are their photos taken in different locations and time.

He is jovial Naruto, a character from Japanese Manga/Anime who has become boys favorite.

Masha, the naughty but yet cute and clever character from Russian.

I am not sure if there is a cartoon meeting in Bogor. There was no announcement about any conference that will be attended by famous cartoon characters. For sure, I won’t skip such kind of unique gathering.

Anyway, if you are an anime or cartoon lovers, no need to try to surf on Google. You will not find such congress happened in this city.

What you have just looked are just street performers. You can see that near the Snow White or Masha, there will always be an ex biscuit tin. It is the place where people can drop coins or money as their appreciation.

It has seemed for me the number of street performers in various costume of cartoon or anime characters have increased a lot.

You can see them not only on streets but also on traffic lights. Yes, traffic light, you do not read it wrongly. They will approach your cars and do some motions to attract the attention with a hope that you will pass them money.

Finding a job is not so easy in Indonesia, including Bogor. The competition is so tight considering more than millions. This is a quick solution to earn a living.

I should have said it as a creative way that should be encouraged. Unfortunately, as mentioned on above paragraphs, they also act on traffic lights and public areas and this has caused disturbance to public order.

It is quite a dilemma. If I against them, it will look like I don’t support people who try to do a job. However, their appearance in the places where they should not be has caused annoyance to other street users.

I think the same dilemma is being faced by Bogor’s government also. That’s why until now, there is still no action taken to control or curb the increasing number of in costume street performers like Snow White, Masha and Naruto.

So, while they also entertain children, at the same time they also disturb others. Probably, the government is confused about how to handle this kind of problem for the same reason that I face.

Better than thinking something confusing like that, probably, I must do what other Bogorians do in the case of On Street Snow White and Friends.

Just enjoy them as they are also parts of Bogor’s life.

2 thoughts on “I Met A Snow White On Bogor Street”