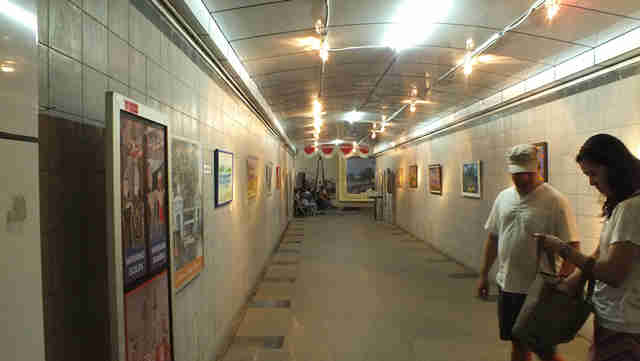 People in Indonesia, not only in Bogor has accustomed to see public facility as bleak, dark, and dirty. However, they have been woken up recently by the appearnce of a pedestrian tunnel about how the public facility should be.

Instead of dark as they always find, the tunnel is so bright full of light from one end to the other. The tunnel is also quite clean.

More than those, the tunnel gives the feel of like being in an art gallery than just a common place for people to make a cross.

The rows of paintings attached to the wall along the pedestrian tunnel are the main contributor. At least twenty, in various types of paintings can be seen hanged on the walls. Each has its title written next to its frame.

What makes it more interesting, the appearance of a group of street performers at one corner. In their casual shirts, they bring various oldies songs accompanying people who walk down the aisle.

The combination of both has made the environment is similar to an art gallery instead of just a pedestrian tunnel.

If you stay in Santika Hotel in Botani Square complex and would like to make a visit to Bogor Botanical Gardens, then you will surely use this way.

The tunnel is located only 50 meter from the hotel. The tunnel connects the pavement in front of Bogor Agriculture Institute next to your hotel and the Gardens entry gate. It is the nearest route.

The Bogor Government developed it in 2003 to anticipate the worsening traffic condition around the area.

Unfortunately, not too long after the inauguration ceremony, its intended function had been lost. This was due to vandalism, lack of maintenance and the supervision.

Until two years ago, the tunnel had been known as the nest for harlot and became a house for many homeless and beggars. Vandalism had destroyed many of the equipments and caused the aisle to be dark due to the absence of light.

Eventually, pedestrians were very reluctant to make a pass. They preferred to cross the busy street than to walk down the tunnel. Luckily, in 2014, the Mayor of Bogor was changed. The new government announced their intention to make Bogor as a pedestrian friendly city.

One of the first action taken to achieve this goal was to rehabilitate many public facilities, especially the ones related to pedestrians. Pavements have been made or repaired. Gardens and parks were put on the top lists as to be taken of. To bring back back this pedestrian tunnel was not forgotten.

The idea applied actually imitated several facility in more developed countries that the public facility was made to give convenience to people who use it. It should not be just boring as how public facilities usually looks.

The government initial target was to attract Bogor citizens to re-start making use of this pedestrian tunnel.

Finally, last year, the rehabilitation of this facility was completed. As the announcement to Bogor people and at the same time persuading them, the tunnel was chosen for paintings exhibition.

The exhibition invited positive response from Bogor citizens. They started to utilize the facility again.

Another exhibition was held here again in October 2014, that time, it was Batik exhibition. Hundreds of Batik designs and clothes were hanged along the tunnel and it gave such nice feeling to people that came.

Now, there have been no more exhibitions held. However the appearance of the only pedestrian tunnel in Bogor is kept the same. Paintings are hanged just like in an art exhibition or gallery.

The presence of the street performer is like the icing on the cake . There are many street performers around Bogor and most of them are more like beggars than musicians.

This one is different. Their clothes are proper and casual not like common street performers in Bogor. Their appearance is quite nice to see and doesn’t scare people.

The most of all, they do what musicians should do, playing music or sing or both of them. Their music and voice are quite nice to hear.

It adds another touch to the pedestrian tunnel and makes people feeling like being in an art gallery.