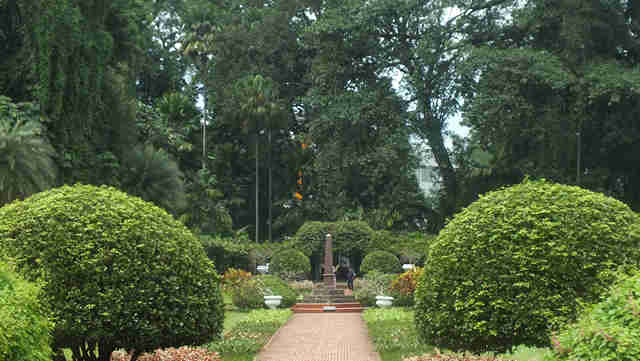 In the west side of the famous Bogor Botanical Gardens, there is a place that every photographer will surely like. Its name is Teijsman Garden. (Teijsman : read – Teysman)

The above picture should show how the place will be seen behind a viewfinder of a camera. Do you dare to say that it’s not beautiful? I don’t think so. It is definitely beautiful.

Even for a person who doesn’t like to take pictures of landscape, the garden is quite overwhelming. This is one spot in the Big Gardens that is often used for photographing. It is not seldom the place is used also as the background for filming.

The Teijsman Garden was built in 1884 by Melchior Treub, the Director of Lands Platentuin, the predecessor of the Bogor Botanical Gardens between 1880-1910.

He dedicated this place for a person, his coleague, named Johannes EliasTeijsman, a Dutch Botanist.

Teijsman arrived in the biggest Dutch colony in Asia as a member of Van Den Bosch’s team, the East Indie Governor General between 1830-1833. Before his arrival in this country, he already played an important role in a botanical expedition throughout countries in South East Asia region.

As soon as his arrival, Van Den Bosch appointed him to take care of the Lands Platentuin. He was assigned to occupy the empty position of the Gardens’ director.

During his directorship, the place grew a lot.

Teijsman, with his collector instinct, successfully expanded the number of species planted in the Gardens. When he took over the place, there was only 918 name of plant species listed in the catalog. When he resigned in 1869, the catalog had more than 10,000 species.

More than just increasing the collection of the Gardens, Teijsman introduced Palm Oil Tree. He brought in the parent palm of Palm Oil tree from West Africa. The species now has become one of the reason of growing economy, not only in Indonesia but also in South East Asia region.

Indonesia and Malaysia are currently known as number one and two in the crude palm oil (CPO) in the world.

He found that Cassava could be the source of food. Chicona, a tree with Peru origin was also spread to all over Indonesia to fight Malaria diseases.

Later on he created another botanical garden in Cibodas, around 40 kilometers southern Bogor. It is called Cibodas Botanical Gardens.

The most of all was that when he separated the administration of the Bogor Botanical Garden from Bogor Palace. With this separation, the place could be accessed by researchers from any countries.

Researchers from any other countries could study the species in this country openly. The knowledge and science have benefited from Teijsman decision.

Those are all the reason in the Melchior Treub’s mind when he decided to establish the Teijsman Garden.

He would like to dedicate this place from his botanist and science lover compatriot. Treub would like people to remember about a dedicated person who had dedicated most of his life to grow the place , his service to society and also his contribution to knowledge and science.

The Teijsman Garden is the dedication for a very dedicated person.

What can be found in Teijsman Garden?

The garden is not so vast. It has around 200 meter length and around 100-125 meter width. Most of the garden was just like a usual garden, of course a rich people garden with the green of grass fulfilled almost all over the space.

However, with hundreds years old trees surrounding the gardens, it creates an amazing scene to everyone who sees.

At the center of the Teijsman Garden , an obelisk form sits. It has around 2.5 meter tall in brown. This is the memorial statue, the dedication for the very dedicated person, Teijsman. That’s why it is called as Teijsman Statue.

It is the core of the Teijsman Garden.

I wish a time machine was already invented now. If there is a time machine, probably this guy is one in my list to see vis-a-vis.

This city, Bogor and this country owed quite a lot to this man. Not only to make the Bogor Botanical Gardens like today but also for something he introduced in the past. Yes, he might have the same nationality with the ones who had caused a lot of misery to our people for 350 years. However what he did also saved a lot of lifes from diseases and famine.

So, whenever you visited Bogor Botanical Gardens, please do not forget to pay a visit to Teijsman Garden. You should see the dedication for a very dedicated person.