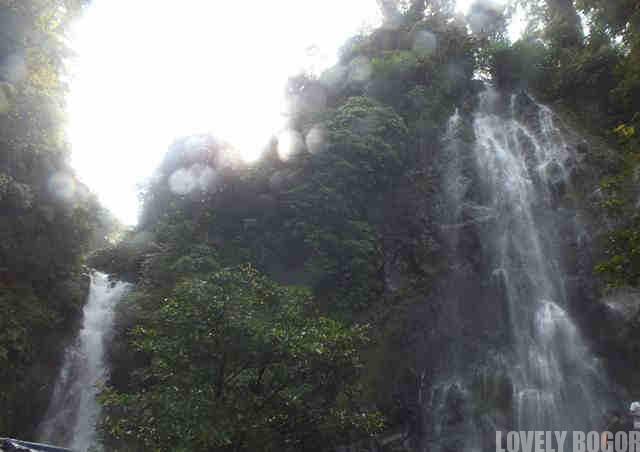 Twins! The beautiful Cigamea Waterfall, probably it should be called waterfalls, are twins. There are two falls here.

If you have read the previous writing, The Beauty of Cigamea Waterfall #1 – Agree?, then you may have known that from a distance the site looked to have only one waterfall. When we arrive to the location, then we will have different view.

There are two beauties on the site.

They are not identical and the similarity lays on their height. The falls both have approximately 50 meters height. Other than that, both falls are different each other.

The first one, I call it slim fall, looks narrower than the other. This slim one has a pond under. Water from a height pours without any obstacle direct to the small pond.

The other one appears wider but actually the source of the water seems to have the same width. It looks wider because water is blocked by rocks protruding on the way where the water falls. It spreads and make the appearance wider.

Different! However both are so beautiful. You can see both on the above pictures.

What do you think mates? Are the twins pretty, beautiful and sexy? Am I right? Let me know your comment.

Anyway, the fact that the Cigamea Waterfall or Waterfalls are twins is not the last thing I want you to see. There are still some more that will be written shortly.

Just keep your channel here. It won’t be long. I promise.