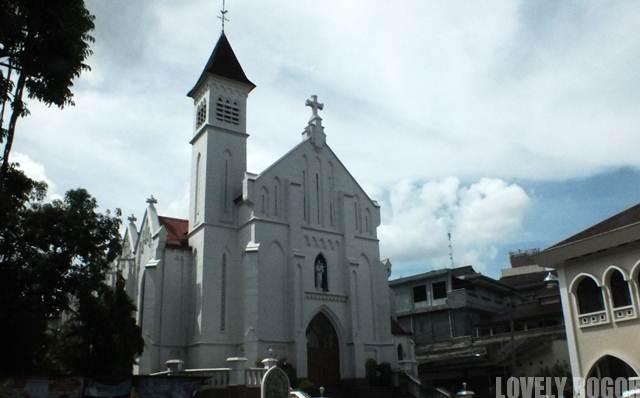 The photo above is what has been known as The Bogor Cathedral Church.

It was built in 1896 by a man named MYD Claessen, a Dutch Missionarist in Buitenzorg (now known as Bogor)

The church was developed in order to meet the needs of Catholic believers in the city more than 100 years ago. In the past, when Dutch still ruled this country, there was only very few churches in Bogor.

Due to its limited number at that time, before the set up of the church, the mass service for both Protestant and Catholics had been done in the same church, the Simultan Church.

Both believers started to have their own place to worship after this Cathedral Church developed. The church is also called as Maria The Virgin Saint Church.

The building has been strongly influenced by European Neo Gothic Architectural Style in 19th century. This can be seen on its big pillars, ornaments and also its thick wall.

The structure has been assigned as one of 487 cultural heritages by the government.

Youcan pay a visit to this cultural heritage as it’s located not too far away from an entry point to Bogor, Bogor Railway Station. It is only 300 meters walking down the Captain Muslihat Street.

2 thoughts on “The Bogor Cathedral Church – The Heritage”