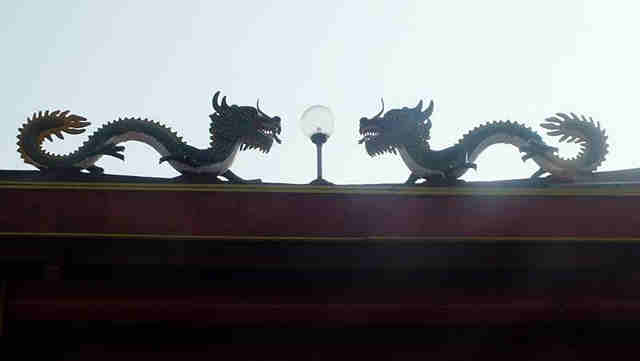 Where is the Dragon? Please be patient.

I understand that writing about Chinese culture can not be separated from the existence of the myth of benevolent dragons. It is a must because the dragon means a lot for people from Chinese ethnic.

Therefore, in order to show you that Bogor is also formed by Chinese culture then I must provide you with proofs that there are dragons in the city. Twin dragons. This ornament can be found in Ciampea Hok Tek Bio Temple, Western Bogor Suburb. The twins sit on the roof of the temple.

The temple is one of the oldest having an age of more than 200 years. The dragon in different form can also be found in another Hok Tek Bio Temple. Yes, there are two Hok Tek Bio, one in suburb area and the other in the center of the City,Suryakencana Street, the Chinatown of Bogor.

Again, there are two sitting at the top of the temple’s roof. The temple itself is already 300 years old. The next dragon can be found attached to a “hio lo” (a place for hios). When a Chinese worships they will use several hio and burn them at one end. After the ritual, the hios will be placed to a jar called as hio lo.

The above hio lo can be found in one of the oldest temple in Bogor, Chen It Thian Kun temple in Babakan Madang. The temple is also known as Bio Dewa Rejeki (The God Of Fortune). The age of the temple is said to be around 400 years old.

At this moment, that’s all dragons that I can bring to you. However, since there are still many Chinese temple located in Bogor, either the city of the suburbs, I will find it more later.

When I find them, then there will be more writing about the dragons in Bogor.

Please be patient. I will bring them to you. I promise.