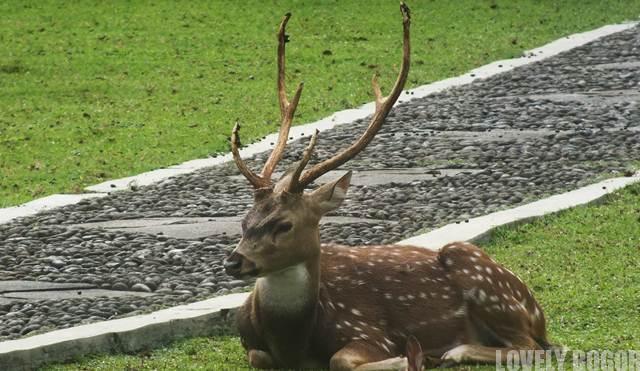 Well. I would like to introduce you to this beautiful creature. The white spotted deer or in Indonesia, it is called as Chital.

The reason for my introducing this species is because simply I do have to.

The white spotted deer has been decided to be the animal symbol or icon of the city, Bogor City. Therefore, I believe this is the thing you should know.

The White Spotted Deer : The Chital/Axis-Axis

The deer has other names besides what they are commonly called by Bogorians.

The first of the others is The Chital. The name can be heard if you ask Indians to mention the name of the species.

The 2nd one is Acis-axis, if you ask a zoologist to spell its name.

Why it is called as white spotted deer is because of white spots spreading all over its skin. The spots can be found from legs to necks. That’s where the nickname comes from.

The species was not actually an Indonesian origin. The Chital was brought in by Raffles in 19th Century when he was assigned a Liutenant Governor General of Dutch East Indie.

It was imported for a specific reason, hunting. This was the sport British Aristocrats were very fond of.

Six pairs were shipped to Indonesia and put on the front yard of Bogor Palace where more than 600 of the descendants still live until now.

Perhaps they don’t have formally “Indonesian Origin” stamped on their history but the Axis axis now has become the symbol of the city. Whenever you mention to Indonesians where to see the white spotted deer, then you will be directed to this city.

If you come to this city, perhaps you should try to feed this animal.

Many of the deer will approach you. The animals has been so accustomed with human that they are no longer afraid by our appearance.

Just buy carrots or other vegetables sold by street vendors near the fence. Then, you can start to feed the animal. It is one activity Bogorians often do every weekend.