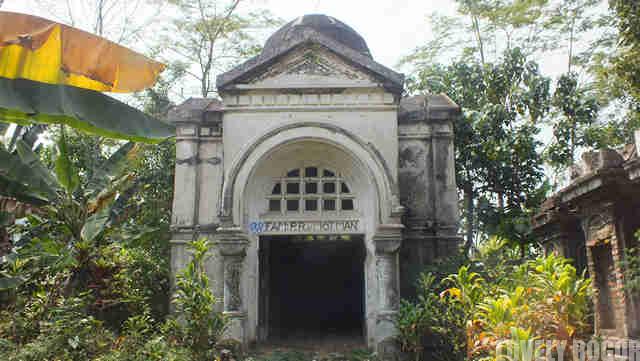 Van Motman Mausoleum – Can you imagine to be the landlord of 118 square kilometer land? I can’t. If I try to imagine what it looks like, then what popped out in my mind was Richie Rich, not me.

Well, I don’t know how it feels to be a rich man owning such vast land. That’s why I could only imagine about that cartoon movie I saw whe  I was a kid.

Anyway, this article is not about Richie but about a place or a site in Bogor Regency. The place is a mausoleum located around 20-25 kilometer in west direction from the center of Bogor City. It is called as Van Motman Mausoleum.

The name of the site is after a name of Gerrit Willem Casimir van Motman, a founding father of van Motman family in Indonesia. The history of Bogor recorded this family to be one of the richest family in the archipelago in 19th century.

The family owned a vast 118 square kilometer land in an area that is currently known as Bogor City and Regency. The size of the land is more less equal to the size of nowadays Bogor City where more than 1 million people live in.

Can you imagine? If you can’t, I will understand.

Based on the fact them as very wealthy family, the mausoleum should have been a very pretentious structure. It was said the atructure was built imitating Saint Petrus Cathedral in Rome. The materials used such as granite and marble were shipped directly from Europe.

It should be because Van Motman buried 33 members of his family and relative in this complex. The number included 6 out of 13 his children. He should have want his beloved kids to rest in the proper and decent place.

Unfortunately, current citizens or visitors may not be able to imagine such glorious time of the richest family in Bogor. The current Van Motman mausoleum can not provide enough ingredients for people to even make an imagination of how rich the family were. The mausoleum is only a rubble.

There is almost nothing that can show the greatness of Van Motman family. Out of 33 tumbs, there are now only 12 that could be seen. No expensive granite or marble that should be able to give indication that the complex were a special site. The site wre looted heavily.

Preservation of historical sites and atructures in Indonesia has never been good. It is still lucky that the complex still remains, even in bad condition. At least, the mausoleum can still show the remian of a person who was the richest landlord in this city.