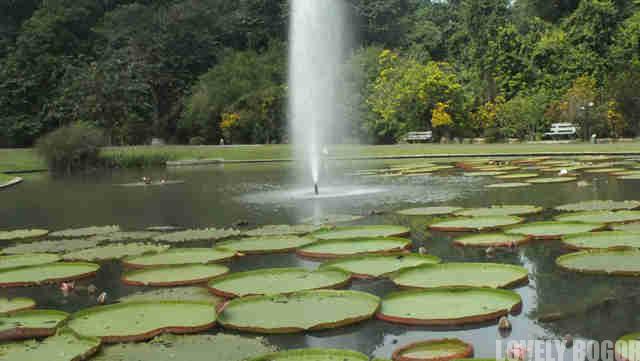 Victoria Amazonica, the Giant Lotus is something that will attract your eyes.  This aquatic species can be found in Astrid Park of Bogor Botanical Gardens.

The species has a gigantic posture compared to other species of waterlilies. The leave diameter can reach 1.5 M. It is said that its leave can allow a baby below to sleep on the leave. Very big. The leave floats on water surface but actually its stalk, that can reach 7-8 M is submerged into the water.

The species, as also other lotus species has a beautiful flower.

It was found by John Lindley in 1838 and named Victoria Regia. The “Victoria” was taken from the name of British Queen in Lindley Era, Queen Victoria. It was just in 20th century the name of Victoria Amazonica becomes known.

There was no reference about when this species entered Indonesia. It was guessed to be in 1830’s – 1880’s during Johanes Elias Teijsman era as the Gardens’ director..

The view of the Giant Lotus in the pond of Astrid Park is amazing, especially when their flowers blossoms. The pool filled with their gigantic figures and also beautiful blossoming flowers will provide very nice views to visitors.

Combined with the beautiful scenery and landscape of Astrid Park, then it makes the environment surrounding look perfect.