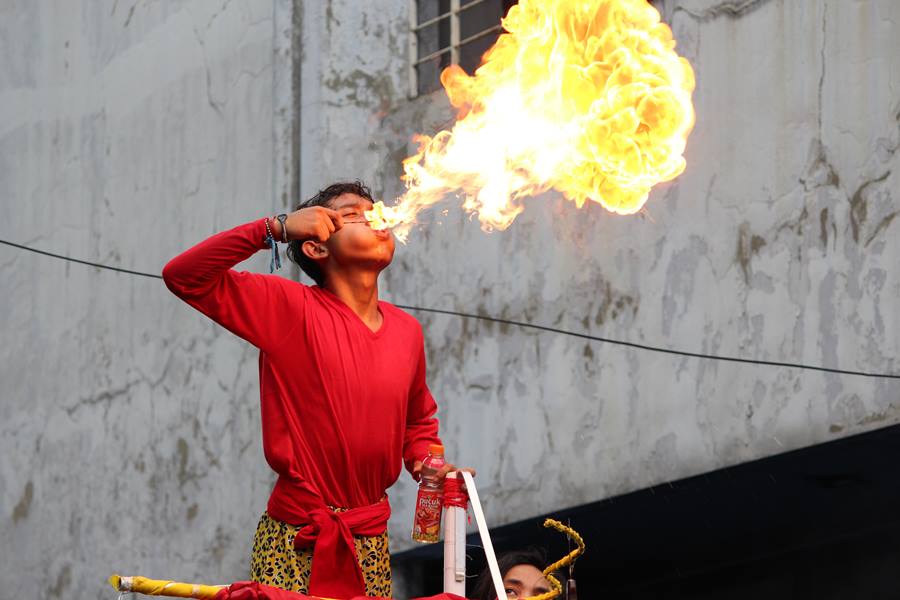 Have you ever seen flame comes out from someone’s mouth? I meant real fire not metaphor.

If you never saw, then probably, you should start to book your trip to Indonesia, to Bogor City for your next year vacation.

Yeah, unfortunately, next year not this year. It is not a custom also to see such kind of thing as it doesn’t happen daily in this rain city. Probably, I only see it once a year in an event that has become an annual event, the Lantern Festival or in Indonesian, Cap Go Meh Bogor.

It’s been the second time I saw how fire spurted out from a teenager mouth.

Please take a look at the below picture. No, he was not a dragon decendant but just a human being like you and me. However, he was trained to do the action.

How did he do it?

From my surveillance, he swallow easy to burn, flammable liquid and keep it in his mouth. Then, he put a small burning stick in front of his mouth and spurted out the liquid which immediately created a flame burst. Quite an amazing attraction that you may not find in your places.

It became more attractive when the guy wore his barongsay (the lion) mask and repeated the action. This is one of the attraction you will find by attending the Lantern Festival in Bogor. I saw it first time, last year in the same event but still couldn’t take off my finger from the shutter release button of my camera.

So, probably you can join us next year. The same even will be likely held around February. It is still not sure about the date but it will be on the 15th day of Lunar New Year.

So, will you come? I will be waiting.

2 thoughts on “Flamethrower In Bogor – The Lantern Festival 2017”