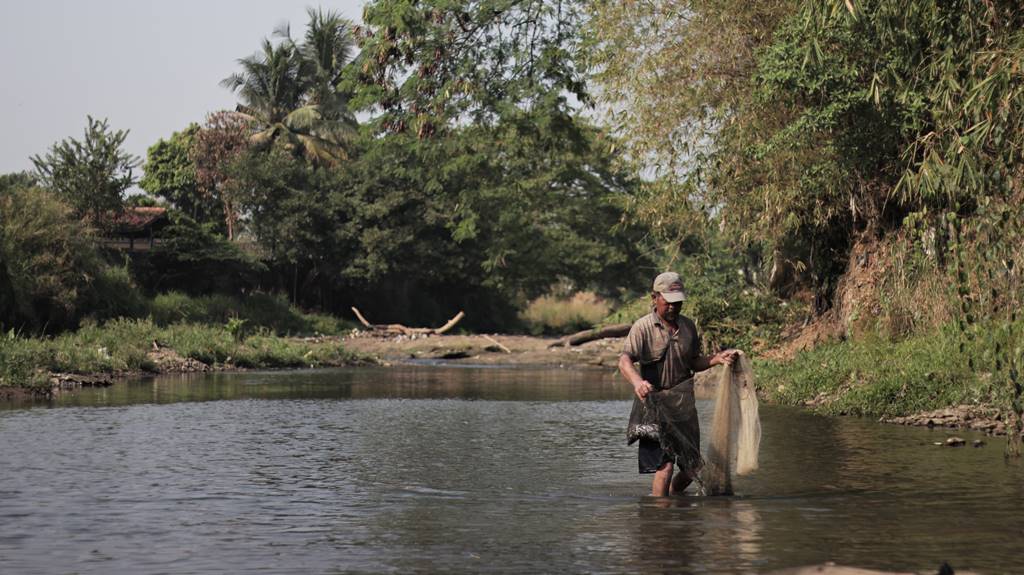 Polluted, it is. Yes, the river that stream through Bogor City, Ciliwung River, has been polluted heavily. The water doesn’t glow when sunshine strike to its surface. its brown water showed how muddy it is.

Furthermore, plastic bag, snack and other wrappers piles on every corner of the river. It should show how not eco-friendly the society is.

Nobody is dare enough to even think any normal fish can live in such polluted river. Except, probably, hypostamus plecostomus, the suckermouth catfish that can handle such harsh environment. This type of fish is known to be able to endure to live in such bad water.

Nobody, including me, a Bogorian who has lived in the city for 42 years. I never thought that there will be fishes inside the stream.

But, I made mistake.

I realized it when I saw a mid 50’s man walking on the drying river with fishing net on his shoulder.

When I saw him, he throwed the net several times to the muddy water.

Did he get something?

The man, the fish catcher showed me a plastic bag full of Gehed fish, Mystacoleucus marginatus, while we was cleaning the fishes he caught.

The fishes were tiny, 5-10 centimeters only.

Later on, I learned that the fish is actually an original endemic species of the Ciliwung River. It is known and called in many terms, Gehed in Bogor, Genggehed in other areas in West Java.

The man told me that he has netted this type of fishes since years before. Further, he told me that Gehed fish is delicious and often eaten as a rice companion. That’s also the reason for him netting on the river that day, to catch fishes for dfamily dishes that day.

However, he mentioned that the number of fishes he could get were reduced day by day. Thanks to the pollution and the carelessness of people as the water got dirty and dirtier day by day.

After a short conversation, the fish catcher got up and tidied his equipment up to go home. Perhaps, his family was already waiting while we talked.

Just few minutes after his figure disappeared from my view, one thought immediately crept in my mind.

Although the river had been heavily wounded by the carelessness of people, it still could provide a source for some people to earn a living, at least food.

But, looking at Ciliwung’s condition that day, one question should raise immediately, “How long?”

How long do the river can endure such cruelty of the people? How long can Gehed fish live and be found in the river? Because, it’s very likely people will keep polluting the river, and it will make the environment much harder to live in for the species.

If the situation gets worse, it won’t be only about some people will lose his source of food, but the city will lose something more important, an original species of fish in the river. One natural wealth will once again need to be erased from already thin list.

Something that made my spine shiver. My worry is getting bigger and bigger after having a chit chat with the fish catcher.

A story that I would like you to know, because perhaps you have any idea to encourage Bogorians to care more about they river.